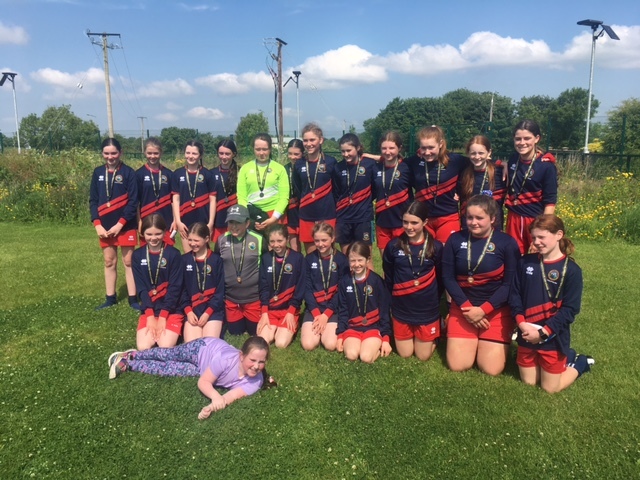 Ballymackey u13 girls finished their season today with a 3-2 defeat to Kilavilla in the cup final. It was a very entertaining game with both teams playing some lovely football. Ballymackey took the lead early on when Olivia Looby dribbled into the box and fired home. Ballymackey came close to a second before Kilavilla came back into the game and scored two goals before half time. Into the second half and ballymackey regrouped and equalized when some lovely interchange set Olivia Fitzpatrick through and she rounded the last defender before firing home. A few minutes later Kilavilla took the lead again and ballymackey tryed their hardest but couldn’t get the equalizer. Panel molly Shelly, Abigail Armstrong, Lisa Fitzgerald, niamh Spain, niamh Kennedy, Zarah Corcoran, Olivia Fitzpatrick, Grace Kilgannon, Olivia Looby, Mioda o shea, Charlotte Deegan, Grainne Troy, lily Kate Kenneally, Jane hall, Isabel manicle, Aoibhin Delaney, clodagh Kennedy, Emma o connell, Anna Fitzgerald, Isabel Ryan and aoibhe hassett.

Congratulations to U12 coach Liam Williams, who celebrate...

Ballymackey u8 girls had a very enjoyable blitz with some...

U16 Girls Progress to last 32 in National Cup

Well done to our Under 16 Girls who are through to the la...

Ballymackey u14 girls bowed out of the Nat cup today losi...

Historic first games for our Football for All Team in New...

Another Historic milestone day for our Club as our Footba...

Ballymackey u8 girls had a very enjoyable blitz with bt h...