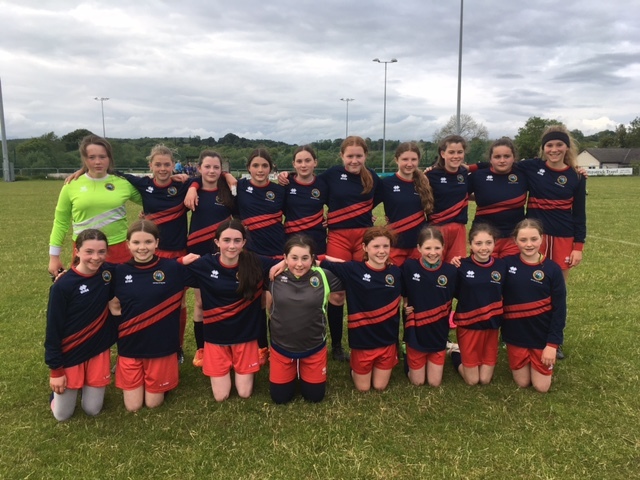 Ballymackey u13 girls played out a pulsating 2-2 draw with Kilavilla in the league Tonight. Ballymackey needed to win to tie level with Kilavilla at the top of the league and force a play off. Ballymackey were five minutes away from the win when we conceded an equalizer that meant Kilavilla were league winners. kilavilla are a fine footballing team and we congratulate them on winning the league. The game was end to end throughout balkymackey started the brighter and came close to opening the scoring on a few occasions, however Kilavilla took the lead before half time. into the second half and ballymackey regrouped and equalized about 15 mins in when Olivia Fitzpatrick found Mioda o shea in the box and she rifled to the roof of the net. Two mins later ballymackey were ahead when Mioda o shea broke into the box rounded the goalie and finished to the net. Ballymackey held the lead until 5 minutes from time and the girls gave it their all to try and find a winner. Panel molly Shelly, Abigail Armstrong, niamh Spain, Lisa Fitzgerald, niamh Kennedy, Olivia Looby, lily Kate Keneally, Olivia Fitzpatrick, Zarah Corcoran, Mioda o shea, Charlotte Deegan, Grainne Troy, Jane hall, Grace Kilgannon, Emma o connell, Anna Fitzgerald, Isabel manicle and aoibhe hassett.

Congratulations to U12 coach Liam Williams, who celebrate...

Ballymackey u8 girls had a very enjoyable blitz with some...

U16 Girls Progress to last 32 in National Cup

Well done to our Under 16 Girls who are through to the la...

Ballymackey u14 girls bowed out of the Nat cup today losi...

Historic first games for our Football for All Team in New...

Another Historic milestone day for our Club as our Footba...

Ballymackey u8 girls had a very enjoyable blitz with bt h...