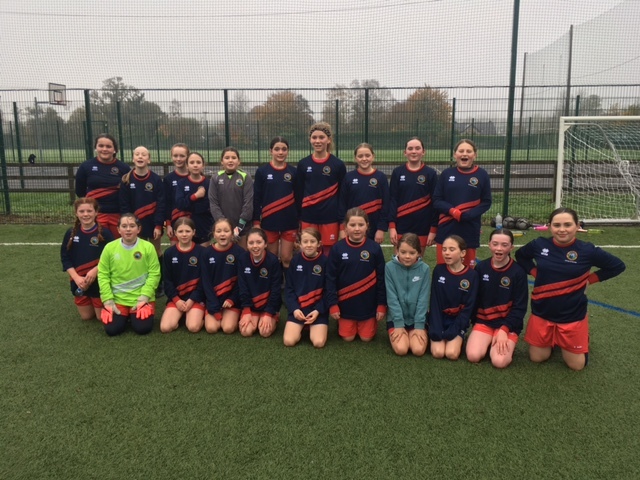 Ballymackey u12 girls travelled to lough derg today looking to reverse the defeat to the same opposition on the opening day of the season, played on Astro turf it was a very entertaining game with some good football played by both teams. ballymackey started the brighter and went close early on before a great cross by Olivia Looby found Charlotte Deegan in the box and she finished to the net. Soon after it was 2-0 when another cross into the box found Olivia Fitzpatrick to tap home. Lough Derg came back into the game and pulled a goal back before half time. Early in the second half a great corner by lily Kate Kenneally was finished to the net by Olivia Fitzpatrick to make it 3-1. Lough derg put balkymackey under a lot of pressure and only some last ditch defending by niamh Spain and Abigail Armstrong kept Lough Derg out. Soon after though it was 3-2 when a Lough Derg corner led to a scramble in the box and Lough derg pulled a goal back, ballymackey pushed on again and a great run by Olivia Looby in which she rounded the goalie before finishing to the net to make the score 4-2. With 7 mins left a powerful shot by the Lough Derg player made the score 4-3. Ballymackey defended resolutely in the last minutes to hold on for a 4-3 win. Panel Emma o connell, niamh Spain, Anna Fitzgerald, Abigail Armstrong, Olivia Looby, Olivia Fitzpatrick, lily Kate Kenneally, Grainne Troy, Charlotte Deegan, molly Conway, Amy Hackett, Isabel ryan, molly o Brien, lily o Brien, Sophie o Farrell, aoibhe hassett, Mary Kate Purtill, Madeline England, Caoimhe Cleary, Lauren Cleary and clodagh Murphy.